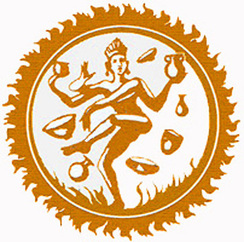 This is my studio where I investigate creative possibilities.
I call this place…

Shiva D Studio
The "D" is for Donahue.

The image of Shiva, dancing in a ring-of-fire, is the inspiration for my
studio and nearby smoke-firing pit.


Shiva is best known as the Hindi God of Destruction. However, as a major deity in the Hindi hierarchy, he wears many hats.  Shiva’s major rep as a destructor is mellowed by his acceptance as a force behind rebirth and renewal.
This is the metaphor I’m going with for my creative practice.

While I have a Fine Arts degree in Ceramics, the route to Shiva D was anything but direct.  Along the way, there were many years of family raising and all the tasks, attention and care that accompanied that activity.  I pursued "art" careers that encompassed professional illustration, teaching Ceramics and graphics design and was in and out of a PhD program that was interrupted by real life.  There was also some soul satisfying world travel to whet my appetite for other times in other places. While these were all worthwhile pursuits, it wasn’t until I finally returned to my first love, pottery, that I was able to
become a full-time studio artist.

On my logo, Shiva seems to be juggling pottery rather than dancing. I guess life’s too short to stand still and we humans must keep learning, creating new ideas and art to make us happy.  In my studio, where Shiva rules, I can create work that expresses how I survive in the present world while remembering the lessons I had learned from visiting the past. Primal
technology can be learned by following the simple crafts of our ancestors, and inspiration can be created from whatever resources you have on hand. The natural world can provide inspiration and fuel for making art.